One of the best methods for improving your playing ability is to study, and imitate, great guitarists who are already playing the types of music that you enjoy most.  This works because 1) you’re already a fan of the work, and 2) you’re more often willing to take time and learn their songs, as well as try and perform it with some resemblance of their sound.  This in the end makes you a better player. 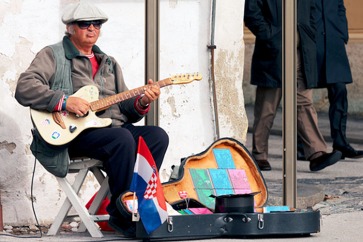 Something basic that every new guitarist learns is how to form a power or barre chord.  Once you’ve got that shape(s) figured out, and are able to pull off some clean tones, you’ve opened the door to learning gazillions of songs (ok, maybe it’s bazillions… I dunno, but it’s a lot!).   And then, If you can play just seven major open chords, you’re on your way to playing bunches and bunches and bunches of stuff.

Even if we aspire to play something more advanced, technically, this approach helps establish a baseline for the general feel and rhythm of a song.  It might be a classic gem that you’ve been dying to learn (“oh, yeah, give me a little Sweet Child O’ Mine, won’t ya!“)…  or sometimes it’s a tune you find yourself humming along to as it came across the car radio (“hey, that Phillip Phillips guy sounds alright; I bet I can play that“)… or maybe it’s just playing a song to death in a relentless quest to try and capture that sound (“If I just play it this way, maybe then I’ll sound like Hendrix!?!?“)

Now that’s all fine and well, but back to our question:  If/when you learn to play this cool stuff, does that mean you know how to play your guitar?  Or is it that you only know how to play a bunch of stuff?  It’s important to consider this distinction, because when an artist talks about being able to play, she is referring to all the other aspects of playing ability:

If/when you do commit yourself to learning about the instrument, that is when you really begin learning how to really play.

It’s fun to perform a bunch of stuff, but actually knowing how to play your instrument without any script or outline takes it to a whole new level.  You’re connected to the guitar.  You’re not just staring at some tab sheets, you’re actually listening to the sounds that are coming out.  And, even without any theory knowledge whatsoever, you feel how and where the appropriate tones should fit in.  Make no doubt about it, playing a bunch of other people’s stuff will help you get better.  But learning how to play, and how to create original works of art, puts you in a whole another league.

And it’s one worth joining.